Byron sighed and once more donned his ridiculously toony rabbit ears and affixed the pinky rose-bedecked tailbow to his tail before taking the Easter basket in his teeth. He'd turned this into a tradition since Kirsty was still swaddled in Etain's sealskin and strapped to her mother's back. Kirsty had always been amused, and more amused when he used some creative slight of hoof to produce some large chocolate and caramel filled eggs. Far better than taddywafers. He'd even kept it up after Kirsty had been old enough to go away to school and training.

After a good long gallop to work out his nerves he finally plunged into one of the Gates. He crossed worlds as a matter of course, but he rarely visited the one where ponies were the race most known for their societies. He still towered over them, even the rulers if tales of their heights were accurate. Oh well.

He went to the library, sticking out but thankfully still considered somewhat part of it all since he didn't look too wildly different. He had no idea if they saw his markings and didn't care. Not everyone saw them anyway. Only Guardians had them, a product of the magics they were entrusted to wield when necessary.

A hoof, carefully placed, pushed the door open and he settled on his favorite cushion next to his purple friend to hear a story. He wasn't particularly caring of what story, but a story was needed since he himself had no one to tell one to. His friend, one of the other Storytellers, nodded at him in greeting. From the chair before their cushions, the story began. 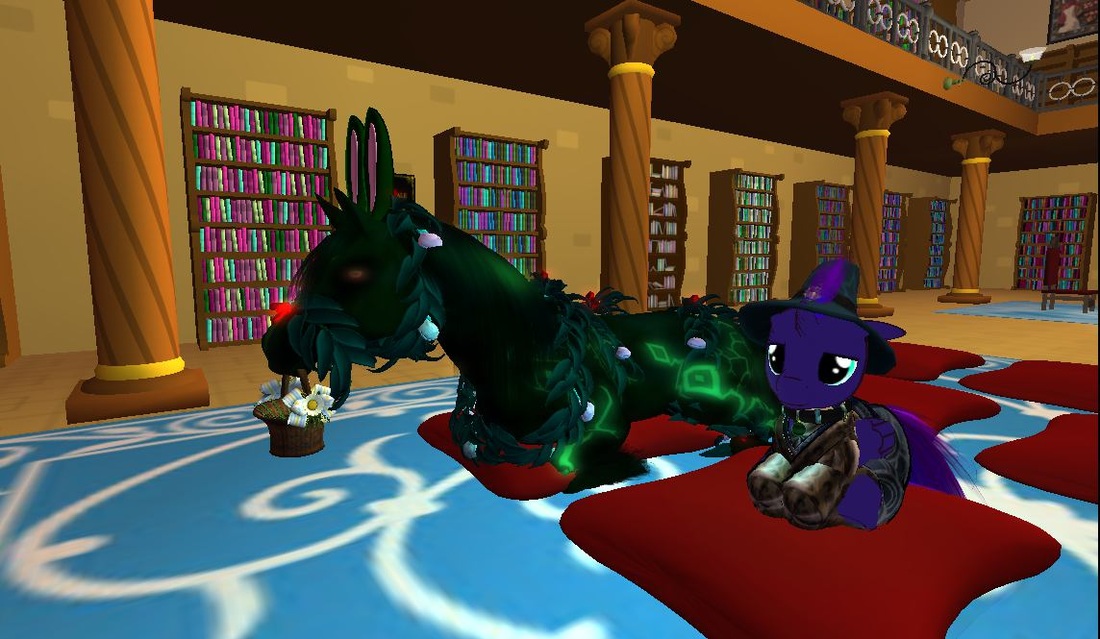 This is an Easter short just because it hit me. Byron sometimes likes to sit by the Voice (Illya Leonov AKA Morgan Freepony) that narrates the Selkies' Skins books. Happy Easter, to those that celebrate it.
Original posting is found at: rainstardragon.dreamwidth.org.
Original posting date: April 5, 2015.