Race: Deity-created/bred Selkie
Descendants: All the Makay line of Seal Point
Ancestry: Mara and the Lady of the Well, as well as attributed to the Lord of the Hunt. More recently in the ancestry line she is a child of one of the Priestesses of the Marainion line bound to the Temple of the Ninth Wave (off the coast of Scotland, which has branches off the coast of Ireland), and a Priest of the Waevetroder line of the Temple of Northern Lights in the North Sea (off Germany).
Status: Non-living, currently essence ensouling at least one painting (possibly several) that Byron created in order for her to provide guidance to her progeny... and assist those worthy of gaining the skin that she lost and died before reclaiming. She also had plucked several hairs through her lifetime to keep ready to enhance the abilities of her descendants.

Byron's belief is that the fall of her family from the trading fleet they had worked up to (still keeping the fishing fleet to sustain the village Seal Point grew to) was partially resultant from Makays turning more toward not keeping Marsali's hair around them, offending Mara and leaving an opening for enemy magic.

Marsali and Byron used to travel the seas widely while she attended to her tasks and met with various eligible families along the various coasts when it was time for her to more seriously consider her pupping obligations to Mara and the less interacted with sister of the sea goddess. As a result of the breadth of her travels, Marsali learned (or was gifted with the knowledge of) various human groups (and the selkies and other sea folk).

Favored coasts were the Irish, Scottish, and German coasts, and she was seriously considering a young priest from her father's bound temple. A storm that Mara did not have control over (the Moon deity was seriously suspected, although Mara also believed her sister to be involved somehow) lead to Marsali meeting a very off course Irish fisherman...
And ended up skinless at what became Seal Point, much to the consternation of Byron and the Selkie that had been courting Marsali. Marsali's story is properly told outside the current book.

Her descendents inherited a gift for language, all sea related talents, song, water magic, and soft hearts from her... and her human husband's gift for human magic, which was enhanced by the combination. 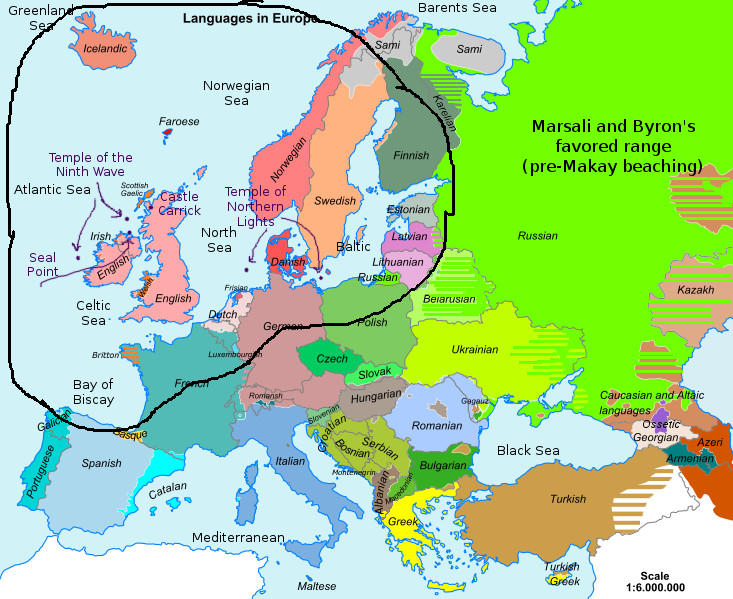 Locations are only roughly plotted and occasionally move slightly or otherwise cloak themselves (such as mists, storms, or weird electromagnetic phenomena) as protection.
Base map is from the Wikimedia Commons and used under Creative Commons.